Avon founder, David H McConnell didn’t set out to create a beauty company. He was a travelling book salesperson who offered fragrance samples to his female customers as an incentive. He saw the women were more interested in his free perfume than his books, which inspired him to recruit women as sales representatives, and from a small New York office, McConnell himself mixed the company’s first fragrances. The model worked. Avon opened operations in Canada and South America, and by 1957, the number of Avon representatives had grown to 100,000 and the company had broken the $100 million sales mark.

Two years later, in 1959, Avon opened operations in the UK on a site at Nunn Mills. Avon’s presence included a main office and a large factory, which produced the full range of Avon products, including the signature perfumes, cosmetics and toiletries. 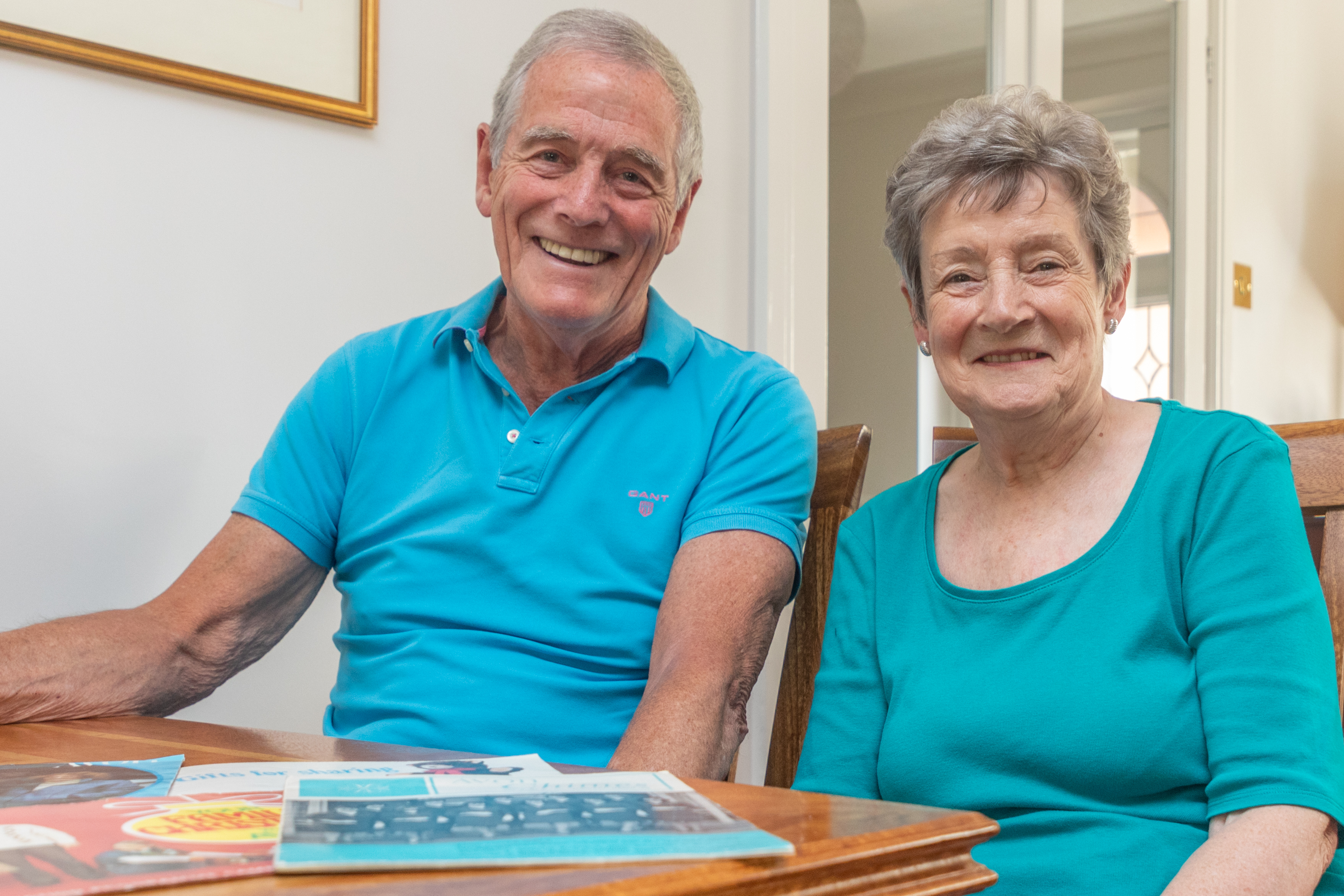 Bob Allibone and Gina Webb discuss their memories of working at Avon UK.

Gina Webb worked for Avon Cosmetics in the early days, until the birth of her first child in 1966. “I worked in a pharmacy to start with," she said. "But I knew Avon Cosmetics because my mother was a rep and I thought I’d enjoy working somewhere like that. The wages were also really, really good. Shop work wasn’t a patch on what you could earn at Avon Cosmetics, and that was another encouragement.

“I started in 1962. I think I saw it advertised and rang up for an interview. In the beginning, I was in the service department, which dealt with all the post and packaging. I used to catch the early bus from Little Houghton where I lived, and started work at eight o’clock.  My main role was dealing with all the post.

“I delivered the post to the main offices and all round the factory, and then I went back to the service department where there was more mail to open, photocopying to do and other jobs.”

Bob Allibone also joined Avon in the early days, and stayed with the company for nearly 40 years until the factory closed and production was phased out. “I started in 1963. I was a 22-year-old engineer and started off working on the benches, lathes and milling machines," he explained.

“My typical day was making parts for machines. If a machine broke down, we’d have to make any parts we needed to repair it. The basic hours were 8 o’clock to 5 o’clock with an hour for lunch, but my normal day was often from 8 in the morning to 10 at night, Saturday mornings and all day Sundays, because I wanted the overtime.”

Bob wasn’t the only person whose working hours were often “flexible”. Gina’s job in the service department introduced her to all the departments on the site and she soon changed roles. “I knew the factory like the back of my hand,” said Gina, “and that was when I applied to be a tour guide.

“When I first started it was probably once a day, but within two years you were doing it full time. We would take the managing director and his groups of visiting dignitaries and well-known people on tours of the factory. We also had groups like the WI visiting.

“When we finished the tour, we used to take them for tea and cake in the big canteen, and then we’d go back to the office and have a late lunch break. It could be any time: if you had a group of people, you had to work round the tours.”

It was about this time that Avon introduced a new uniform. “Our old uniform was a pale blue-grey colour and then we had this new dark blue uniform from 1963,” said Gina, who was photographed on the front of the Avon magazine in her smart new suit, complete with hat and gloves. 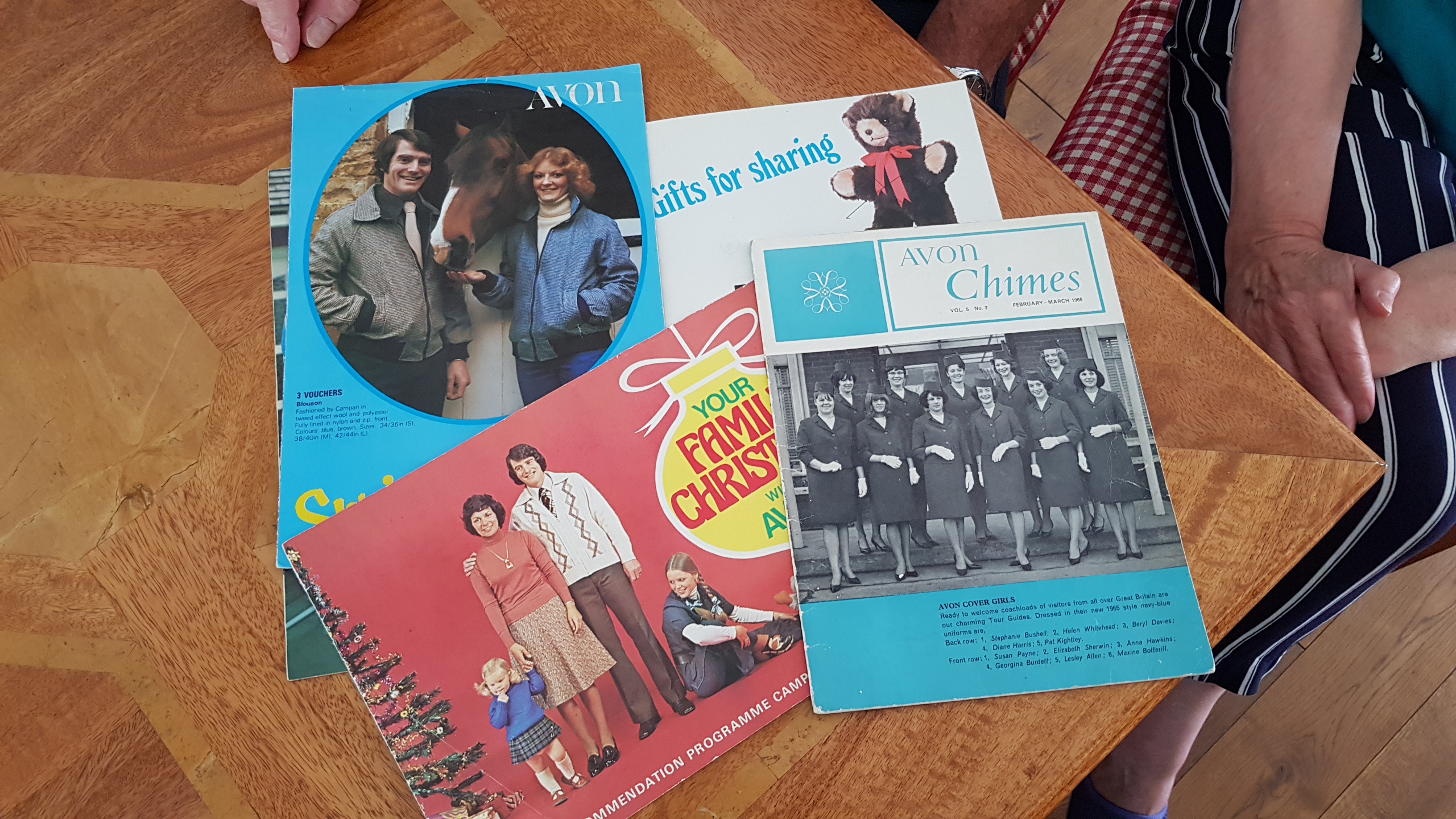 Bob Allibone and Gina Webb modelling the uniforms and clothes.

Bob, too, progressed at Avon Cosmetics: “If, for example, you had a new bottle shape coming, you had to adapt the line to suit the product. I became a project engineer responsible for making special purpose parts and developing new machines to put these new products on the line.

“I travelled all over Europe and America looking at new equipment to buy for Avon. I visited companies in Italy, France, Germany, Denmark and Sweden, as well as North America to bring new technology back to Avon. At the same time, I was also a supervisor for 20 engineers.”

That wasn’t Bob’s only role, he also spent three years as an Avon model!

“Imagine this,” he said: “I was working on the lathe one day, in a workshop full of men, when I became aware of two people standing behind me. They were the people who put together the magazines for the Avon representative incentive prizes. When I turned round and saw them they said: ‘We’ve been watching you for the past two weeks and we think you’d fit right in as a model for the men’s clothes.’ Can you imagine a group of men hearing that! Well, I did do modelling for three years and got to keep all the clothes.”

Avon’s workforce was mainly women. Bob remembers there being around 1800 employees, around 400 of which were men. And while it was mainly women working in the office, it was probably equal numbers of men and women on the production line.

“At Christmas time, when the orders came in thick and fast, they used to ask you to go on the packaging lines,” remembers Bob. “So, you’d sit there putting caps on bottles and labels on bottles. You used to have to pick a bottle up, turn it over, put it back in the machine, put a label on it, and put it back on the line. The bottles are coming down around 60 per minute. The men always had piles of glass around them, but the women could do it!”

Christmas at Avon was also a special time for other reasons.

“They used to bus the whole factory, 1800 people, to the Birmingham Bull Ring to a place called the Mayfair Banqueting Suite,” remembers Bob. “We’d have one of the top pop groups of the day, with drink all day long and food all day long!”

Gina and Bob both remember Avon as a happy place to work.

“It was a very nice atmosphere,” said Gina. “You got to know pretty much everyone in the factory and the team of tour guides was a nice little group; we got on well together and supported each other.”

“It was a super place to work,” said Bob. “They were terrific employers. They thought of employees first – always. The managing directors would speak to everybody. It didn’t matter who you were, they knew everybody’s name.”

And Gina agrees: “Working at Avon was like being part of a big family and I loved being able to tell people about it.”

In 1989, the first factory was replaced by a new facility, which was officially opened by Princess Anne, and in 1992, Avon UK launched its Breast Cancer Crusade, which was quickly adopted by Avon worldwide. From 1959 to 2004, 45 years, Avon Cosmetics UK produced products from its site at Far Cotton, until production finally ended and was transferred abroad. But while production has ceased, the Nunn Mills site is still home to Avon UK’s headquarters.