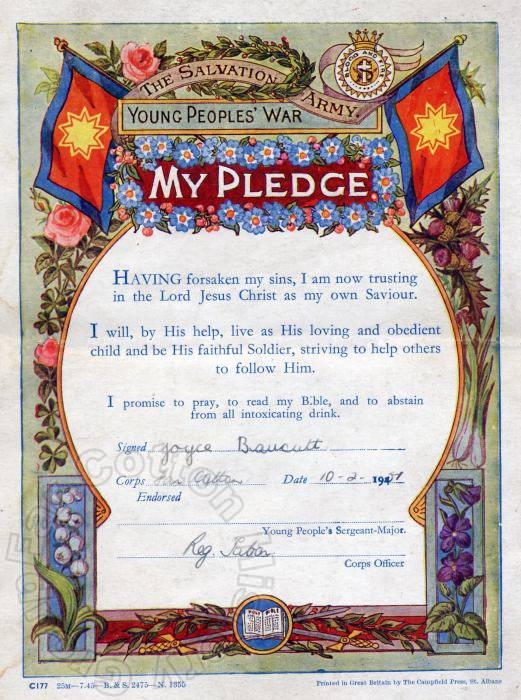 “I can remember from the age of 3 years being picked up from home by Sergeant Major Mrs Bull, who then took me to Sunday School at Henley Street.

“Entry was via stone steps and through two large wooden doors into a porch. Doors on each end of the porch lead into the main hall. Through these doors the hall had rows of polished wooden pews, there was a large black old fashioned stove for heating.

“Further into the hall was a raised platform with steps up at each end, in front of this was a bench with kneeling pads, this was known as the Mercy Seat.

“At the back of the platform was another door leading to another room, this is where the Sunday School was held. Another door in this room lead to the outside of the building.

“At the age of 12 years I signed The Pledge promising not to drink, smoke or go to the cinema etc.

“At the age of 14 years I became a Corps Cadet and Sunday School Teacher. To become a Corps Cadet I had to take Bible lessons and sit an examination. For these lessons I had to go to the Leiutenant’s house in Euston Road with my sister in attendance as a chaperone.

“I taught Sunday School in the back room by telling the younger children stories from the Bible. We had a “table”. When the top opened it revealed a sandbox and movable figures. As the story unfolded, I would get the children to move the figures to match the story. Other times I would sing little songs to go with the story.”