The parish of St Mary the Virgin was established in 1875. Before then, Far Cotton had formed part of the medieval parish of St Edmund's in Hardingstone. While the parish registers date from 1875, the church was not built until 10 years later.

Today, the handsome building on Towcester Road is a Grade II* listed building. It was designed by Matthew Holding, who was responsible for a number of prominent buildings and churches in Northampton, including the 1890s' extension to The Guildhall. The land was provided by the Bouverie family of Delapre Abbey.

While the congregation waited for their new church to be completed, services were held in a barn in Main Road. When the new church was completed in 1887, the building lacked a tower, which was added in 1902. Further additions included a church hall.

An article from the Northampton Chronicle & Echo describes the development of the church and its congregation.

In the nine years that he has been vicar of St Mary's, the Rev A J Howitt has seen widespread changes in buildings, not people. The people of Far Cotton and district remain very much the same, a close knit community of similar interests and aspirations, with many parishioners tracing their family history back to the beginnings of St Mary's as a parish, a little short of a century ago.

The big changes of the past decade centre on housing, the demolition of old dwellings, the erection of new, the rise of an entirely new estate at Briar Hill and the current erection of a new mini-estate at the Towcester Road end of Gloucester Avenue. And, "just over the hill", on the southern fringe of St Mary's looms the Southern District Plan, a vast expansion designed to put a new 40,000 population "next door" to the parishes of Wootton, Hardingstone, St Mary's and Upton.

No decisions have yet been reached in regard to Church work among the 13,000 Southern District dwellings planned for the near future but obviously all neighbouring parishes will be affected, closely and dramatically. Mr Howitt will be concerned not only as vicar of St Marys but also as Rural Dean of Wootton, a deanery whose 23 parishes lie on the Southern District's "door step". Emphasising that decisions on Church planning, organisation and buildings in the impending development have yet to be reached, Mr Howitt said: "It will not be the job of neighbouring parishes to make decisions Our main role will be one of consultation and the Diocesan Pastoral Committee always gives every opportunity for the closest consultation and co-operation in its planning."

The parish of St. Mary was formed in 1876 and the church completed in 1885 when Far Cotton consisted of terraced artisan houses, which stopped short of Delapre Lodge gates on the London Road; and, west of the Towcester Road, were contained between Main Road and Rothersthorpe Road. It was not until after the First World War that Far Cotton houses begin to climb the hill through a council housing development beyond the Recreation Ground. St Mary's, the third of four churches built by the Northampton Church Extension Society while the dynamic Mr. Magee was Bishop of Peterborough, had Matthew Holdings as its architect and was built in local stone with Bath stone dressings. It was built on land given by Mr J A S Bouverie, of Delapre Abbey, and the lender accepted was that of Mr Thomas Cosford in the sum of £3,340, the total cost of just over £4,000 including "extra gifts in the building". The Vicarage, also built by Mr Cosford to the design of Matthew Holding was opened in 1887. The tower and spire were added to the church in 1902 and a fine church hall built some 30 years ago. St Mary's Parish, whose population has risen from 12,000 to 14,000 during the nine years of Mr. Howitt's ministry, has maintained its character between the London and Towcester roads ,but west of the Towcester Road big changes have already taken place and more are promised.

When Mr Howitt arrived at St Mary's in 1964 a start had been made on the Rothersthorpe Avenue industrial estate and further industrial development lies ahead now that Rickard Street, Henley Street, Oxford Street, Letts and Delapre Street have gone in whole or in part. The prefabs have gone from Gloucester Avenue and a variety of new dwellings are well advanced on the site. Many of the people displaced from the prefabs and of the demolished houses moved to the latest - and biggest of all Far Cotton's housing developments. Briar Hill School populations are also on the move with new building close to Mereway foretelling the imminent close of old Main Road School which started on the other side of the road 140 years ago. But Church life at St Mary's remains so very much the same. "So far as its type of people are concerned, the parish doesn't change very much," said the vicar. "We still have a strong family tradition and, possibly more than in any other part of Northampton, the same families have clung to the district and to the church." When Mr Howitt moved to St Mary's there was one curate, the Rev Ben Lewers, now chaplain at Heathrow Airport. Today there are two curates, the Rev Michael Bever and the Rev Rodney Schofield, both married and both living "up the hill".

At St Mary's the emphasis is on family worship and congregational participation. The Rev David Richardson, vicar from 1952 to 1956 started Family Communion at St Mary's and it became well established under Archdeacon Bazil Marsh, when he was vicar from 1956 to 1964. Congregational participation has grown steadily over the years. Laymen and lay-women read the Lessons, read the intercessions at Parish Communion and, as in most parishes, lay people form the offertory processions. As the population of the parish increases it becomes increasingly difficult for the clergy to keep in touch with all parishioners but, to meet this, the clergy have carried out door-to-door visiting. As an example every house has been visited on the Briar Hill Estate. "It is a parish which continues to offer great opportunities," says the vicar, "and our resources are great. As one example, there are so many craftsmen among our members that we can do things ourselves and save time and money."

"We could field a team of carpenters," said Mr Howitt and introduced me to Mr John Warden, a railwayman, who, having attended voluntarily to the rows of chairs inside the church is now attending to the doors.

St Marys, its work well balanced between all age groups, is strong in young people and organisations for the young include "splendid" Church Youth Groups, Scouts, Cub Scouts, Guides, Brownies and a GLB company. Adult groups include a mixed Parish Fellowship, a Men's Venture Club, St Mary's Bowls Club, Mothers' Union, Ladies Club and Ladies Work Party. As for the fabric of the church, the last quinquennial survey disclosed only minor troubles following the massive £5,000 restoration of 1966. There was, however, the warning that the next survey, due four years hence, might bring the need for more heavy spending. 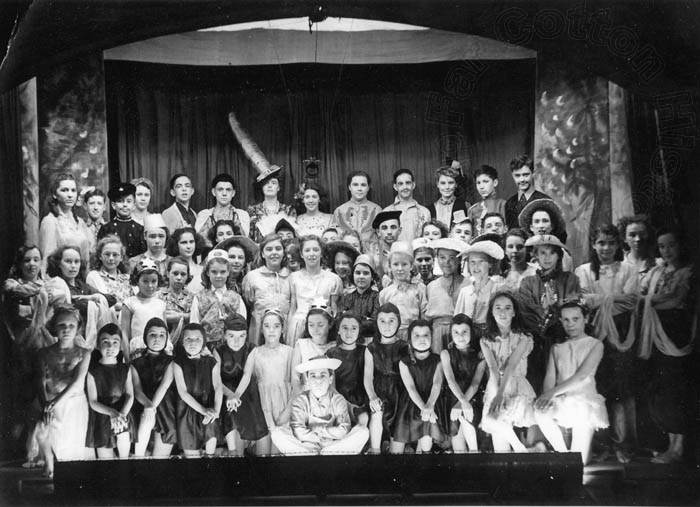 "I have enclosed a copy of a photo taken Xmas 1948 from my sister's collection. Mr Collier who lived in the old Cotton area used to direct and present an annual Christmas panto, with cast mainly from the Sunday night youth club. This youth club met after church in St Mary's hall and was popular because of some of the risque games played such as "kiss-wink". You were not allowed to go to the club unless you had been to church! Mr Collier had a daughter Joan born about 1936 who took part also. The panto had a few local performances and then a few in the town. My vague memory is of going to a home for mentally handicapped children and they were the most appreciative audience."