I suppose that my connection with Far Cotton goes back over one hundred years to 1911, the year in which my father was born at No 63, St Leonard’s Road.

Reginald Harry Bland was the younger child of John and Lillian Bland.  I know little of his early years, except that his mother died when he was quite young. His sister, Hilda, married in 1922, when he was 11, so thereafter he was brought up by his father.

My dad attended Far Cotton School in Main Road, leaving at the age of 14 to enter the world of work. In those days, continuing education was the privilege of those who could afford it, or who were able to find their way to one of the town’s grammar schools.

Although his father had worked for an insurance company, my dad wanted to use his hands and opted to become a carpenter and joiner. I am unsure of the precise chronology but his employment was largely Far Cotton-based. He worked for a cabinet maker in Clinton Road, then a tennis racquet maker, before being taken on by the Council, where he was involved in the construction of the housing around the Rec, Pleydell Road, and Delapre Crescent Road. 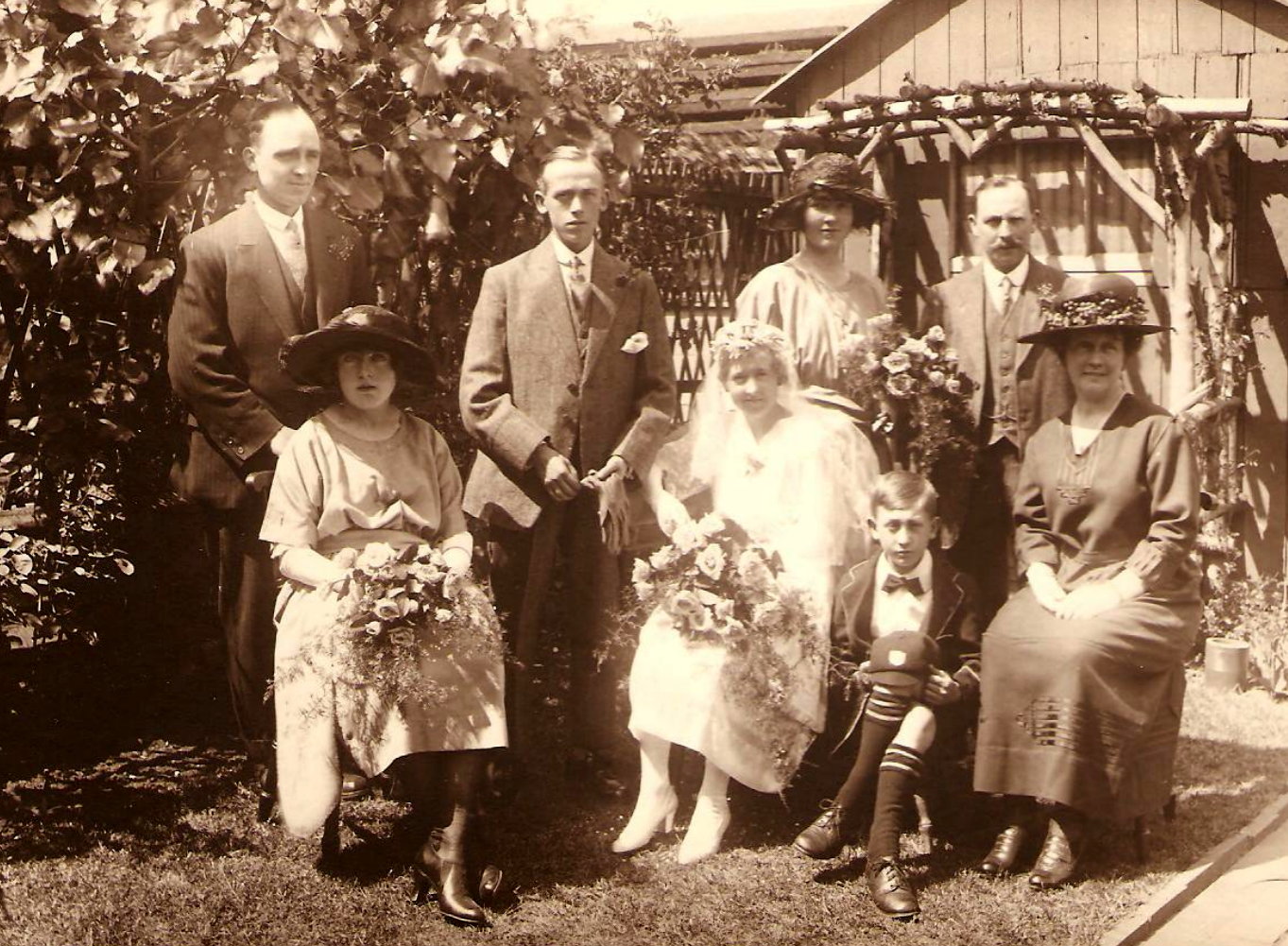 Probably taken in the back garden at 63 St Leonard's Road. The back row includes Hilda's husband James (2nd from left and my grandfather John at the end. Hilda, my father and my grandmother Lillian are on the front row.

One story of his from this period concerns a clerk of works: “He (the Clerk of Works) would come to see us on his daily rounds.  I would, perhaps, be working on a window frame.  He would take a look, and be about to move on, before saying something like, ‘Carpenter, that window sill is not level, put it right.’ On checking, it would prove to be out.  It took me a while to realise that his habit of fiddling with a pencil whilst talking to us was the key.  If it rolled in either direction, the sill was not level. I always checked carefully after that!”

During the depressed 1930s, unemployment was rife and my father found himself jobless from time to time. He worked for the Northampton builder, Lucas, who constructed the housing of Briar Hill Walk and Road, even buying No 31 Briar Hill Walk in 1936 for his marital home.  Needless to say, he was responsible for all the joinery within it. Eventually he joined the LMS railway as a carpenter, based at the Permanent Way Depot in Far Cotton.  In more than 15 years as a railwayman he had numerous varied experiences.  Once, after replacing damaged wood at the top of one of the Locomotive Shed doors in Far Cotton, he forgot to retrieve his tin of pink primer, real lead-based paint in those days. Closing the door to check clearance, the paint dutifully obeyed the law of gravity, treating him to a generous coating in the process.  Returning home, he was forced to undress in the garden. I believe, it took over a week for the final traces to be scrubbed away.

In his shed lurked the blade from his adze, a long-handled device used for shaping heavy wood.  Occasionally he would have to work on sleepers when modifying track layout, and so this implement would be utilised. He always stood in a couple of buckets when using it – a slip could lead to a self-amputated foot! One character repeatedly terrified him by popping his head up from below to chat and there was almost one more sleeper on the track bed that day!

Obviously, he had other stories about his time on the railways, but, geographically, they related to places beyond Far Cotton as he and his workmates would travel some distances in the course of their working weeks.  It is, however, worth remembering the significance to the larger network of the railway establishment in Far Cotton and its position locally as a major employer.

I have few photographs of this period in his working life, although, owing to the importance of the railways in wartime, dad found himself in a reserved occupation. Not wanting to be left out entirely, he joined the Home Guard, E Company Railway Group, No 16 Platoon.  Although this was before my time, his experiences were to have an impact upon me.

Every November, dad would bring home fireworks, but the advertised firecracker was never there. Eventually I learnt why. During a Home Guard exercise at Far Cotton Goods Yard, firecrackers were used to simulate rifle fire. Dad somehow managed to get one tangled in his bootlaces and ended up hopping between the tracks whilst it fizzed and exploded beneath him.  After that, he wanted no more to do with the things, hence the empty spaces in my boxes of fireworks! ‘Don’t panic, Private Bland.’

Leaving the railway, dad crossed South Bridge to join Pickering Phipps and Co. Phipps later merged with NBC and was in turn swallowed up by Watney Mann. The war years had seen real scarcity of materials, especially wood and dad could never waste anything which could be re-used.

During his years at the Brewery, especially the 1960s when Watney Mann embarked upon the systematic process of destroying its local heritage and replacing it with Formica and other synthetics, a green lorry bearing the Red Barrel symbol would often arrive and disgorge its load of reclaimed pub signs or parts of interiors for dad to re-purpose when the time came. Looking back at happy Saturday afternoons spent with him while we reduced these piles to numerous lengths or panels. I shudder to recall the various signs which went under the saw, many of which were undoubtedly hand-painted and sign-written works of art in their own right! The eventual arrival of Carlsberg saw the replacement of the individual buildings on that enormous site with the concrete citadel now dominating that part of the skyline.

For many years, dad cycled to work before purchasing a couple of motorcycles; one of which was a ‘Corgi’, the type dropped into Germany with British Paratroopers. He used this for a number of years, without resumption of hostilities, before embarking on a series of driving lessons and passing his test in 1966, at the age of 55.

A 1959 Ford Popular saloon, 383 KEH then joined the family, having been purchased from Rothersthorpe Road Garage for the princely sum of £200. I learnt to drive in it, passed my test in it and, in due course, when the time came for a change, dad gifted it to me as my first car. I loved that vehicle, modified it, rebuilt it and actually kept it until 1976, eventually parting with it after my marriage when the demands of a teaching career and re-decorating our first house meant that Project Ford came to an end. I sold it for £100, less than the value of the new parts and re-furbished engine, and was saddened to learn that its new owner had written it off within a matter of weeks. I still have one of its original number plates and parts of its gearbox in my Man-Cave, and genuinely wish I still had the rest of it!

Following redundancy, as the new enterprise had little use for traditional craftsmen, my father worked for a local organ builder, until a joinery company based in Rothersthorpe Avenue beckoned. Here he spent his final working years before a coronary claimed him in 1976 at the relatively early age of 64. One of his final jobs was to craft a new door for the head of the Fire Escape leading from the Town Hall. It was clearly visible from St Giles Street and, obviously, reminded me of him each time I passed it. I was, I think understandably, saddened when the extension to that fine building was constructed and the last of my father’s craftsmanship in all probability confined to a skip!

Dad liked people, was always happy to help them and loved and treated his children fairly and equally. He was a gentle and considerate man, kind and, I believe, liked within the community. He valued his connections with St Mary’s Church, having been a chorister there, very occasionally playing the organ when the then choirmaster, Reggie Floyd, was indisposed, playing cricket and bowls and, in his later years, contributing in different ways. Examples of his craftsmanship, I think, remain in the building to this day. He, for his part, is interred just in front of the tower, unlike earlier generations of Blands, who made the short journey up Towcester Road to spend their respective eternities adjacent to Tesco.

Paul Bland's family photographs of his father, Reginald and grandparents John and Lillian. 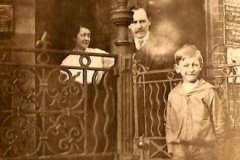 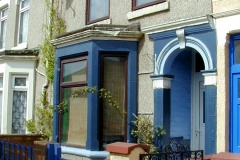 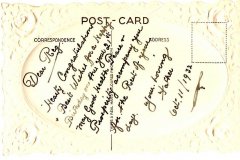 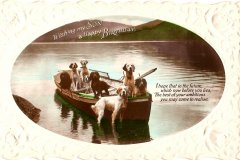 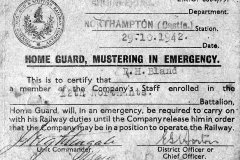 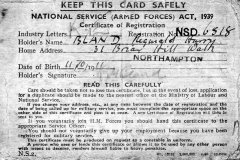 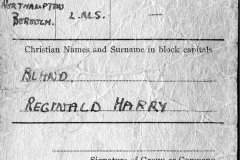 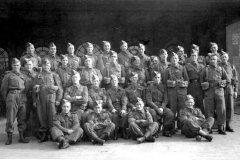 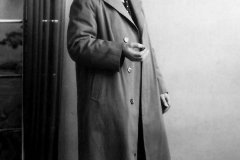 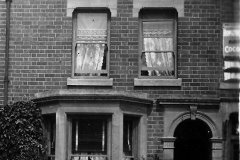 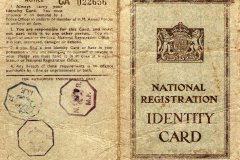 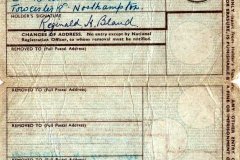 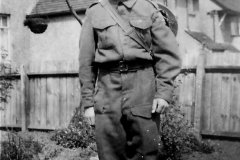 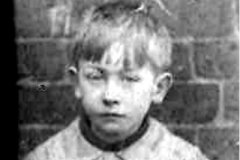 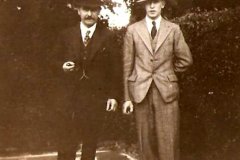 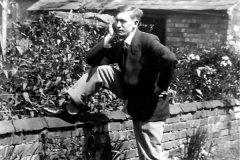 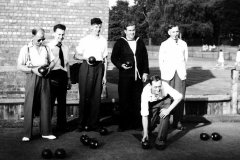 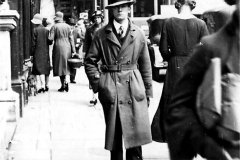 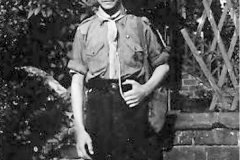 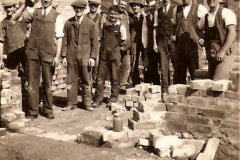 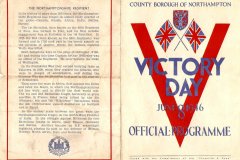 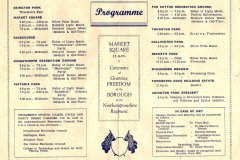 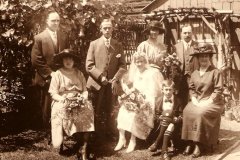