In 1856, George Hall, a carpenter in Far Cotton who went on to become deacon at College Street Baptist Church, set aside one of the new houses he was building in Alma Street for use as a branch chapel and Sunday School.

By 1860, the congregation had outgrown the premises, and a new chapel and school room was built in Alma Street, where services were conducted for 35 years. Richard Cleaver continued in his role as superintendent until his retirement in 1892, when Alfred Cleaver took over the position.

In 1892, Reverend Selby was invited to become minister at Far Cotton and took up his duties on 1 January 1893. On 2 May, 55 people were enchurched, the majority having transferred from College Street.

Again, the congregation outgrew the premises and in 1894/95, a handsome new chapel and school was built on Abbey Road, that could seat up to 500 worshippers.  The cost of the land and building was around £3,500. The opening service was held on 4 July 1895, led by Reverend, JG Greenough, President of the Baptist Union, who preached the service. By 1897, the school had 40 teachers and 300 pupils.

Almost 100 years later it was all change again. By 1980, the costs of maintaining the old building had soared, and the local population was increasing too. In 1987, The chapel relocated to a new building, the Abbey Centre Baptist Church in East Hunsbury.

Parts of the interior from the Abbey Road Church have been incorporated into the chapel at the Abbey Centre. These include the solid oak doors, part of the pulpit, and part of the organ loft balcony, which was used to make the wooden crosses in the Abbey Centre Chapel.

The wall plaques and many other memorials, which once hung in Abbey Road Baptist Church can also be found at the Abbey Centre.

Derngate Housing Association took over the Abbey Road premises and converted the church into Chapel House with apartments for the elderly. 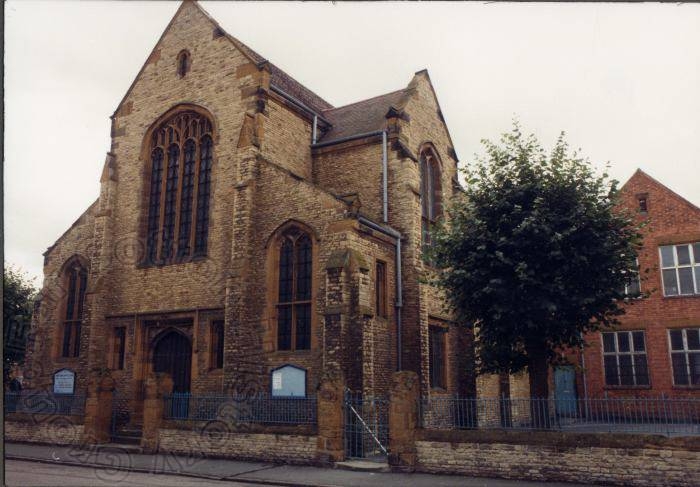 The usual pattern at College Street Sunday Schools was for the school to open with prayers and scripture readings. The children would then attend the public worship with their teachers, and return to the classroom after this to spend the afternoon on reading, writing and spelling. Children were expected to be over the age of 7 years and could remain at the school for up to four years. Parents made a financial contribution to cover the cost of the teachers' wages.

Read about the opening of the Alma Street Sunday School in 1861.