The Tivoli Cinema opened on 13 July 1935 with Victoria Hopper and John Loder starring in Lorna Doone. It was a single screen cinema with 832 seats, situated on Towcester Road opposite St Leonard's Road.

The Tivoli operated as an independent. It was taken over in 1939 by A Cohen's Mayfair Cinemas (Control) and then in 1947 by the independent Midlands Super Cinemas circuit. By the late 1950s it was screening continental arthouse films. It closed on 27 August 1960 with John Garfield and Jennifer Jones in We Were Strangers and Philip Carey in "Return to Warbow.

The building went into use as a furniture warehouse, until the 1980s when it was converted into a tyre and motor repair depot. There was talk about it being re-opened, but nothing came of it. After lying empty for several years it reopened in October 2005 as a tile warehouse.

The Tivoli had three different films a week. People used to let people in at the back, but the doors used to bang so everyone knew. Films would run continuously and people would quite often arrive half way through a film watch it to the end. Then watch it to where they came in and leave.

Memories of "Going Down the Tiv" from members of the Far Cotton History Group.

The Tivoli cinema opened in 1935 and was situated on the corner of Main Rd and Towcester Road. The Tivoli was one of three cinemas (the other two were the Plaza and the Ritz) run by Cippin Brothers. The group was known as Midland Super Cinemas.

The showings were from a Monday to Wednesday, Thursday to Saturday, and a Sunday showing. There were stills of the film outside the Tivoli so you could see what the film was all about. Going to the Tivoli was a way of finding out what was happening in the world - not just politics, but fashion and celebrities too.

During the war the Tivoli opened on a Sunday for the troops staying in the area. The programme usually consisted of Pathe News (with a cockerel at the beginning) the A film, the B film, trailers and serials, with some local adverts too. The newsreel, of which there was only one, was transported across town to the three cinemas for their different showings during the day. The serial included Buster Crabbe in Flash Gordon, Pearl White, and Roy Rogers and Trigger.

The Tivoli wasn’t the most elegant of cinemas. You walked up the front steps, which led into a carpeted foyer with hanging curtains to the left and right. The kiosk on the right-hand side was where you paid. On the left-hand side, a kiosk sold sweets. After the War, you could get Walls Snow Fruits. Crisps weren't sold very often, but when they were, people would blow up the bags and pop them to make the audience jump!

It cost 10d downstairs, 1/6d upstairs (which was just three or four steps up) and 1/9d at the back, which was carpeted. We don't remember there being in any pair seats, just individual seats. And not all of them had backs. Gwen remembers turning round to speak to a friend behind her and they weren't there - they'd fallen off! The first two rows were wooden benches. It was also very damp down the front.

The Tivoli was known for being cold; you often put more clothes on to keep warm. And as you only had a couple of outfits, this meant you couldn’t really dress up. It did have heaters half-way up the walls, which were prone to falling down on you. Josie French remembers sitting with her umbrella up because the roof let in the wet. It was often disinfected or sprayed with DDT. Sheila recalls a visit to the cinema with her mum. When she got home she thought she had been bitten while she'd been at the Tivoli. But when her mum investigated there was a mouse - yes, a mouse! - up her top. The mouse escaped and a neighbour had to capture it

If you couldn’t afford to go to the cinema, there was always a mate who would open the fire exit and let you slip in while the film was showing. This was more likely to have been the lads as there was a fire exit in the gents. Mr Sid Cipin was the manager, Mr Alec Ashby (nicknamed Buttons) was the doorman and a Mr Collins, who was the assistant manager, kept a beady eye open for this sort of behaviour. The projectionist was Dougie Woodford There was also another way to know what was happening with the film. Around the back of the building (which might have been used when courting) there was a rather large air brick and if you put our ear close enough to it you could listen to the film. You would queue down the alley way for the Sunday night showing, hoping to find someone who would take you in.

The films were black and white and starred the likes of Alan Ladd, Rita Hayworth, Jane Russell, Veronica Lake, Hopalong Cassidy, Roy Rogers, Charlie Chaplin, Tony Curtis and The Three Stooges. Doris Day and Betty Grable were watched in colour. If you joined a showing part way through, you could sit and watch the film until you reached the part you came in on. Many often stayed and watched it all over again. The film always finished with the National Anthem, but by then the cinema was usually empty as people left as soon as the credits rolled. Some people moved up to the dearer seats once the programme had finished to do this.

Memories tell us that going to the cinema was a form of escaping reality. It was an imaginary world, something to look forward to and to let us dream dreams. The Tivoli closed it doors to cinema-goers on 27 August 1960. The last film was ‘We were Strangers’. 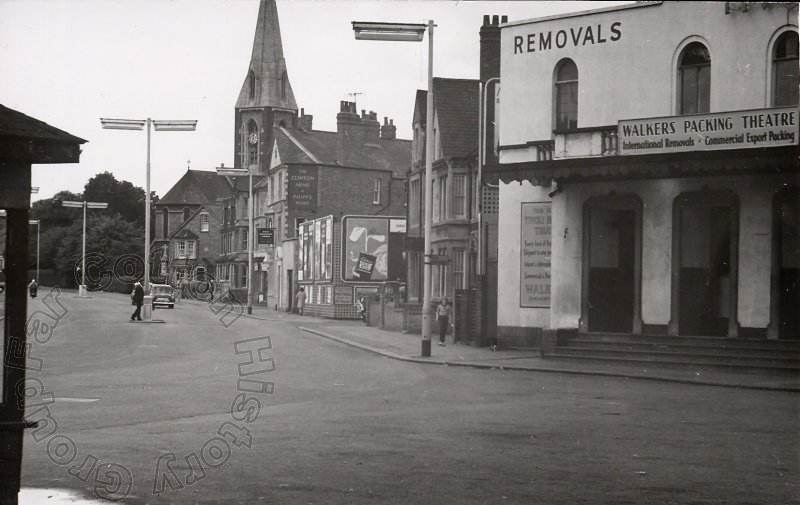 View towards Towcester Road. The building is now in use as Walkers Packing Theatre. Photograph courtesy of Robin Puryer.